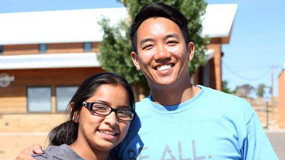 “Today I give you the keys to a new home here on earth, but I also want to share how you can have the keys to a house in heaven” – Pastor Luis

The quote above is slightly paraphrased, but it’s something I’ve thought a lot about since the time I heard it. You see, for many years I thought that the people we built homes for with Amor Ministries were Christians—members of a church whose pastor submitted their names for a new house. Later, I found that many are not, but contacted a local pastor affiliated with Amor and told him of their need. The pastor then gave their names to Amor, and they–Christian or not– were added to a list and patiently waiting up to two years for a group like ours to come and build them a new home.

Not surprisingly, this revelation drastically changed my outlook on the work I had been doing. No longer was I simply doing a “good deed” by building someone a home; now I was a part of giving a person an opportunity to receive the gospel. As the pastor told us about how he would share those words with families as he gave them the keys to their new home, I couldn’t help but think about all those families I previously assumed were believers. Were they already Christians when we met them? Did they eventually come to know Christ? Were we good examples of Him as we worked and in the ways we interacted with them? Was there more we could have done?

When I tell people that I have been a part of 12 house-building trips over the past 9 years, many are surprised and think that it’s a lot—and I guess in many ways it is. But when I think about the number of people who need homes out there, and who need to hear about the love and saving power of Christ, 12 homes for 12 families doesn’t even make a dent. It’s merely a tiny percent of the thousands in Mexico who have had to live with very little, and hope for very little. This is what drives me to grab my tools and pack my bags each year, sleep in a tent for three nights, and struggle against the various challenges that arise with building a house by hand. But when all is said and done, when the bags are unpacked and the dust has settled, it is truly amazing to know that a simple, newly built house here on earth can one day lead to houses being built in heaven.

Welcome to First Chinese Baptist Church, Los Angeles (FCBCLA)! We are a multi-generational, multi-lingual church in the heart of Chinatown. We are passionate about teaching the Bible, growing authentic disciples, and sharing the good news of Jesus Christ. This is a place where your entire family can come to worship, fellowship, and serve together whether you’re nine or ninety years old, speak Cantonese, Mandarin or English. … END_OF_DOCUMENT_TOKEN_TO_BE_REPLACED